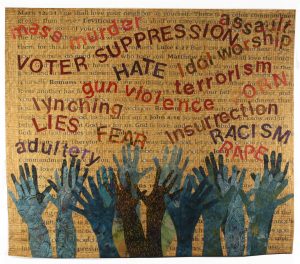 In the past month, I finished new work that absolutely stumped me in design for the longest time. When I finally figured out what I wanted to do, it went swimmingly and I love it so much! It is titled Hypocrisy 1; because you just know I am making another! It is about evangelicals who worship on Sunday and make mayhem on Monday. It is bound to really anger some devout folks, but most people I know who sing the praises are good, decent, loving, kind people. This work is not directed at them; but instead the hypocrisy of whose who claim to be Christian yet behave badly.

Additionally I have been submitting entries to exhibits and this week got the fabulous news that two pieces of my work were juried into the prestigious biennial International Fiber X at the Sebastopol Center for the Arts, July 31-September 12. Seventy two pieces were accepted, many of which are being flown in from all over the world. I’ve entered this show every two years but have not had my work accepted since 2010, so it was really gratifying to get that email!

And, I decided once again to bail on satellite TV. I nearly did a year ago but it all seemed so complicated. Yet when hubs could not watch his beloved Giants (baseball) a couple weeks ago that was the last straw! Oh he could watch it if we added another premium channel to our already bloated plan. So I said uncle and started the process.

The transition required several days of patience, investment in two new Smart TVs, a new iPad for him, because his was too old to stream, several days learning curve and a surprisingly polite conversation with an agent at the satellite company. It turns out I can keep the dish, and do whatever I want with it, for which I have no interest! And no I am not making a quilt of it. My patience continues, as every day hubs needs instruction in how to work the new remote and get where he wants to go. I knew this would be an issue, due to his cognitive challenges, but decided it was STILL worth it to unload the satellite company. And I still believe that.

I joined a FB group for Parkinson’s caregivers which is basically saving my sanity; sometimes having a place to vent is all one needs. I also got my long overdue quarterly art newsletter done (only 3 mos late) and scheduled to blitz mailboxes later this week. I should have taken the time to learn the latest template, but I am a quart low on learning new technology right now! I made labels for work going to exhibit and entered 3 more pieces in another show. Plus there have been those lunches with friends in a valiant attempt to revive my mastery of speaking in person!

So there…all my reasons for neglecting to blog. As an old woman told me when I was young…what good are excuses if we don’t use them?! 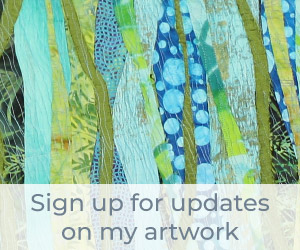 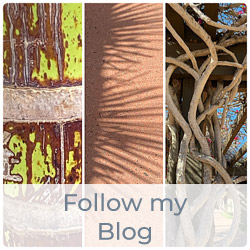